Xbox Game Pass offers both PC and console gamers incredible value for money. In addition to numerous games, a trial subscription for Crunchyroll and other services, the Xbox app will also offer mod support in the future.

In a video, Xbox presents what the upcoming update of the app will make possible for PC users. In the future, PC games can be downloaded from the Microsoft Store or the Xbox Game Pass in any folder and with unrestricted access to be installed.

This means that users have much more freedom and options when it comes to Installing games and using mods is much easier will. You can select the specific file path in which the respective game should be installed.

The update is available now for Xbox Insiders.

Find out what’s new in the official video:

Microsoft’s Xbox Game Pass Ultimate already offers a decent service with numerous games and EA Play. Now it gets even better, because subscribers will soon be able to look forward to Crunchyroll Premium as well.

As part of the Xbox Game Pass Ultimate Perk, Microsoft has already surprised subscribers with special offers and collaborations with brands such as Disney +, Back 4 Blood, Fallout 76 and Apex Legends. Perks are additional free membership benefits for all Ultimate subscribers. If you are one of them, you can now enjoy the free use of Cruncyroll Premium: Mega Fan – whether on the console or the PC.

Members can now Enjoy anime with no ads for 75 days. You have over 1,000 series to choose from, just one hour after the premiere in Japan. There are big names like One Piece, My Hero Academia, Demon Slayer and many more.

In the official trailer you can see what you can look forward to, among other things:

How and by when do you get the offer?

You can get the 75-day trial subscription via the Perks gallery on your Xbox console, via the Xbox app on your PC or via the mobile Xbox Game Pass app on Android and iOS. As soon as you have accepted the offer, you will be redirected to the Crunchyroll website to activate your subscription – but you have to only until February 8, 2022 Time.

Caution! The offer is only valid for new Crunchyroll customers and should you not cancel the free trial subscription, the subscription is extended for a fee. The extended premium membership “Mega Fan” offers you offline playback and simultaneous streaming on multiple devices. The costs are 9.99 euros per month or 99.99 euros per year.

Don’t have an Xbox Game Pass Ultimate yet? You can get it very easily on Amazon, for example: 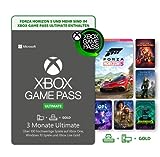