The world was still shocked by the terrible events of September 11th, the first episode of Scrubs was on US television and the Ghibli Museum opened in Japan – we are in October 2001.

On the twelfth day of the month, the Game Boy Advance released a game that was only to make its way to the West via detours and was to celebrate a success there that is unusual for the niche genre in which it is at home.

We are of course talking about Phoenix Wright’s first adventure, which is originally called Gyakuten Saiban: Yomigaeru Gyakuten and accompanies the rise of the young lawyer Ryuichi Naruhodo. We know and love him as Phoenix Wright, but we Europeans shouldn’t meet him until many years later on the Nintendo DS.

Also interesting: The Nintendo podcast – that’s why Ace Attorney is so awesome!

The beginning of a steep career


The Butz again! Reliably the old friend of Phoenix Wright attracts bad luck like a piece of cake to wasps. We have to help him as a lawyer!

But for now we’re just going back a little bit further into the past. Ace Attorney has its origins in 2000: Shinji Mikami, then Capcom employee and none other than the inventor of the Resident Evil series, gave his colleague Shu Takumi six months to develop a game according to Takumi’s ideas.

In fact, there was still a prototype of an adventure game that Takumi had devised in the late 1990s on Takumi’s desk. An important, if not the most important element for him was the dialogue system; he wanted the player to be able to refute statements. Takumi’s early drafts did not include impersonating a lawyer. Initially, it was planned to play a detective – a classic protagonist choice for a mystery adventure, maybe that’s why this approach was not pursued any further.

The next idea was to come under suspicion of murder innocently and have to represent yourself in court because your own public defender was supposed to be an idiot. So, did Winston Payne exist many years before Phoenix Wright? Ultimately, Takumi came to the conclusion that you could embody a lawyer as a protagonist, probably also because several different cases can then be dealt with instead of just one. 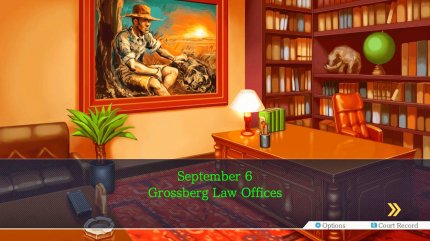 In a typical adventure game, you don’t steer a character through the area, but look at still images of the different locations.

In addition, Takumi was attracted to the legal issue, as it had a real underdog in the lead role. What, why underdog? This has to do with the Japanese judicial system, which, due to cultural reasons, functions a little differently than in Germany.

It was not until the middle of the 19th century that there was such a thing as lawyers defending the accused – since harmony and a sense of community are important pillars of Japanese society, it was already considered a shame to end up in court at all, or to come into conflict with the law innocent or not. The interest in creating further fuss with a lawyer was therefore only present in rare cases. 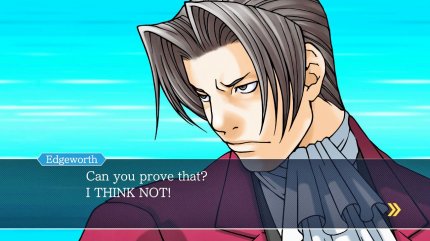 Miles Edgeworth, star prosecutor and rival of Phoenix Wright, is one of the series’ most popular characters. He even got his own series of games!

In the meantime there are lawyers in the realm of the rising sun who do the same job as lawyers in other countries, but the conviction rate of more than 99 percent of cases is significantly higher than that of other countries (in Germany, for example, the rate is a little more than 80 Percent). There are a number of reasons for this, including the fact that comparatively few cases are brought to court in the first place.

Either way, it is extremely unlikely that an accused of murder will be acquitted – unless, of course, he is represented by Phoenix Wright! With the death penalty still being imposed in Japan, there is a lot at stake, which adds to the tension in the virtual courtroom.

Of course, Ace Attorney should not be understood as a realistic simulation of Japanese jurisprudence, the adventure only uses the justice system as a rough foundation to tell unrealistic, but still gripping cases. The developers even attended negotiations and were amazed that the court is more quiet and civilized, very different from what is shown in the game. This artistic freedom was allowed to create more tension!

Another source of inspiration for Takumi does not come from Japan, but from the USA: As a fan of the weird TV detective Columbo, Takumi decided to let the player know in advance who the killer is in the first chapter of the adventure. This is usually also the case in the television series, because the main thing is to witness how the resourceful investigator refutes the perpetrator’s lies and supposed alibis.