Finally back out into the big wide world! When in October, after a year and a half, an invitation to a play-out event fluttered into my mailbox, I couldn’t believe my luck: with real people, on site, live and to touch? Fantastic! And then to Dying Light 2: Stay Human!

Since I first saw the thing at Gamescom 2018, it’s been high on my list. Unfortunately, it has been postponed several times since then: from spring 2020 to winter 2021 and finally to February 4, 2022.

Before developer Techland changed my mind, I decided to get on the plane to Warsaw to finally get my hands on the open world adventure. And to be able to tell you here whether we can actually expect a real gaming highlight of the coming year.

Welcome to the modern Middle Ages!

Of course, we don’t want to reveal too much at this point. Or better: we can’t. This is especially true for the story. Instead of starting from the beginning of the game, the developers preferred to throw us into a game state that was about four to five hours under its belt.

Accordingly, we are only tearing off the main features of the plot here: In Dying Light 2 (buy now € 79.99) you slip into the skin of Aiden Caldwell, a so-called pilgrim who combed the post-apocalypse for his sister Mia. This is the last survivor of Aiden’s family and the key to his mysterious past, which your hero can only vaguely remember.


Moving around is particularly fun in Dying Light 2. In addition to parkour and parachute, ziplines are also available.

Our search for clues led us through two different areas of the game world: Old Villedor, a rather rural suburban settlement with a cathedral and bazaar, and the Central Loop business district. Of course, the business district is also a little exaggerated. Nothing is really modern in the world of Dying Light 2 anymore.

After a mutated rabies virus had turned the majority of the earth’s population into disfigured monsters and the world sank into chaos, mankind was thrown back into the Middle Ages. The developers like to speak of “Modern Dark Ages” here. So there are still a few modern technologies such as electricity, light and radio. For the most part, however, the people live grouped together in small colonies and wear nothing more than scraps on their bodies.

There are no longer any firearms, apart from bows and arrows, perhaps. In the world of Dying Light 2, instead, you give each other hard on the face with melee weapons. In the best case, even with improvised beatings made from scrap. So you can cover the other person with a traffic sign.

If the enemy strikes in turn, you can block his attack or evade him. If you do this at the right moment, you will be rewarded with a short slow-mo sequence. The enemy then only moves in slow motion and is defenseless for a few seconds. This helps you especially with the bigger chunks that the game puts in front of your nose.

In addition to human survivors, you will of course also have to deal with different types of mutated infected people, all of which have different behaviors, attack patterns and vulnerabilities. So you always have to come up with something new.

In order to bring a revenant to his knees, for example, you also have to use surrounding objects to your advantage – that is, blow up gas bottles or pull spears from corpses lying around and then throw them at your opponents.

The whole thing is massive and feels really intense, especially with the vibration feedback from a controller. In addition, the fights in Dying Light 2 are staged really spectacular. The blood splatters, the body parts fly. When it comes to gore, things are not done by halves. Of course, that immediately raised concerns that the USK might fall victim to the title again.

The predecessor landed on the index in 2015. However, this fear was quickly taken away from us by the developers. They are working intensively with the German authorities to bring the zombie adventure onto the German market, we were told in an interview. Even a German localization is being worked on. 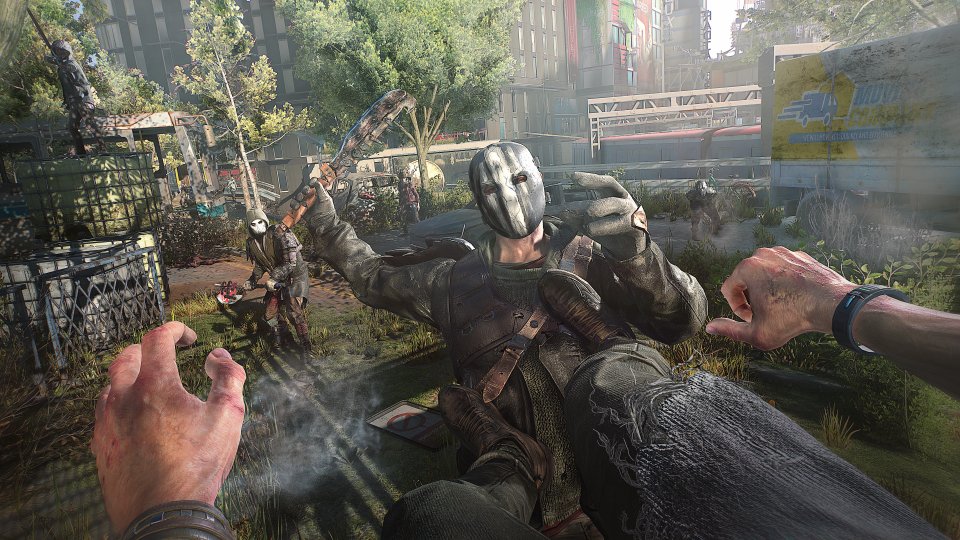 Your parkour skills can also be used in combat. You can later activate a dropkick via the talent tree.

In the light of current events such as the abuse scandals at Activison-Blizzard and Ubisoft, it is important to mention that the development of Dying Light 2 was not without unpleasant incidents. Developer Techland split from story designer Chris Avellone in June 2020 after allegations of sexual harassment were brought against the veteran of the role-playing game scene (Fallout 2, Icewind Dale, Planescape: Torment). Avellone denied any wrongdoing in a public statement and, in turn, filed a defamation suit. However, there was no further collaboration. “We have no tolerance for disrespect and sexual harassment,” Techland said at the time via Twitter.

This decision probably had no effect on the completion of the game, as we learned during our visit to the studio. “We worked with Chris to establish the lore of the game world. He also helped us with his expertise in story decisions and their consequences, ”explained Creative Director Adrian Ciszewski. However, Avellone was not directly responsible for any of the game content. “Chris has nothing to do with the story,” continues Ciszewski. “Dying Light 2 is entirely our own product.” 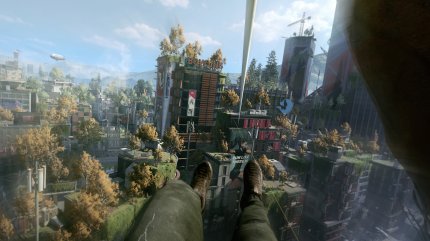 Moving around is particularly fun in Dying Light 2. In addition to parkour and parachute, ziplines are also available.

The big star of the show is, of course, the locomotion: Dying Light 2 also offers you the possibility of simply jumping through the various areas on a fast trip – provided you have activated the required metro stations. As in Marvel’s Spider-Man, free exploration on foot is just a lot more fun.

Even with the first steps through the city, pleasant memories of Mirror’s Edge are awakened: You climb up like a little monkey on the next best street lamp, jump onto the roof next door, roll over once and go straight to the sprint. It’s easy to do, makes you feel good and looks spectacular at the same time. Once you’ve got the hang of it.

The controls are a bit fiddly, especially at the beginning, which is particularly due to the button assignment of the controller that takes getting used to. Yes, you read that right: controller! We were allowed to try out Dying Light 2 on the PC, but for technical reasons we didn’t get a mouse and keyboard, just an Xbox gamepad pressed into our fingers.

And then there is jumping on, for example, on the right bumper and not on the A button. You heal yourself with it. That’s why we used one or the other unwanted medipack, followed by a painful encounter with the asphalt.

In addition, a lot of precision is required for breathtaking parkour action. You have to aim exactly at your target with the right stick, otherwise Aiden will jump past the desired point or reach into space. So always keep an eye out for the yellow splotches that Techland has subtly spread across the cityscape. The game tells you with them: Hey, you can hold on to this rain gutter, to this window sill!