At the G-CON X IGC conference held for G-Star 2021, a lecture was held on the console title ‘Gungrave Gore’, which is being developed by Lee Ki-mob, a domestic developer.

In this lecture, Vice President Kim Min-soo (IGGYMOB, IGGY meaning unique and MOB meaning monster) gave a lecture under the theme of ‘From the beginning of Gungrave Gore to the present’. Through the G-Star conference, Vice President Kim Min-soo discussed the events and difficulties from Gungrave VR to the development of Gungrave Gore. And it was organized as a place to convey the process of overcoming them and their plans for the future. 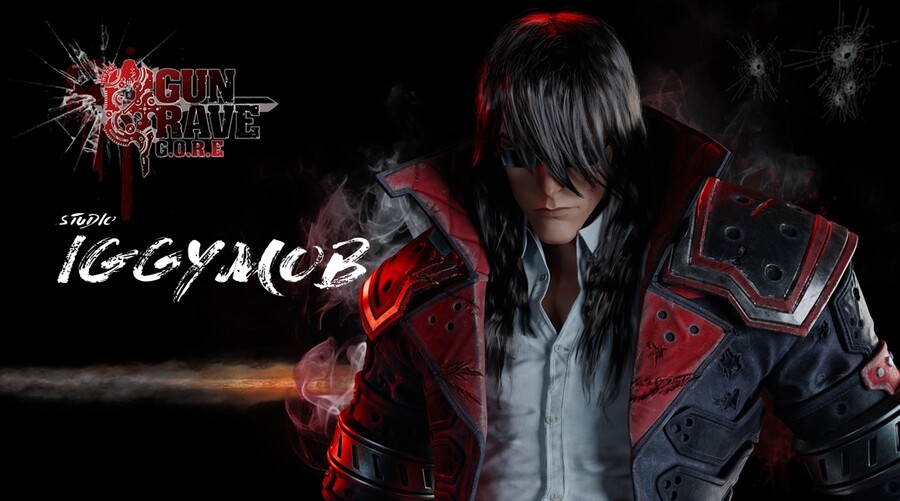 At that time, we were faced with unavoidable questions and practical problems in the context of various IP games. market conditions at the time. In particular, they were questions that could guess from what perspective investors looked at the game.

These concerns eventually led to several questions. At that time, it was a time to prepare for various things in order to receive an investment. The question at that time was BM or multiplayer. It was a level that had to squeeze out something that was not in the existing Gungrave series. The fun of Gungrave, which was released on PS2, was the fun of shooting, but there were questions that caused a lot of trouble, such as having to change it to a command input. In the midst of these concerns, Ki Mob Lee made the decision to give up making Gungrave as a mobile game. 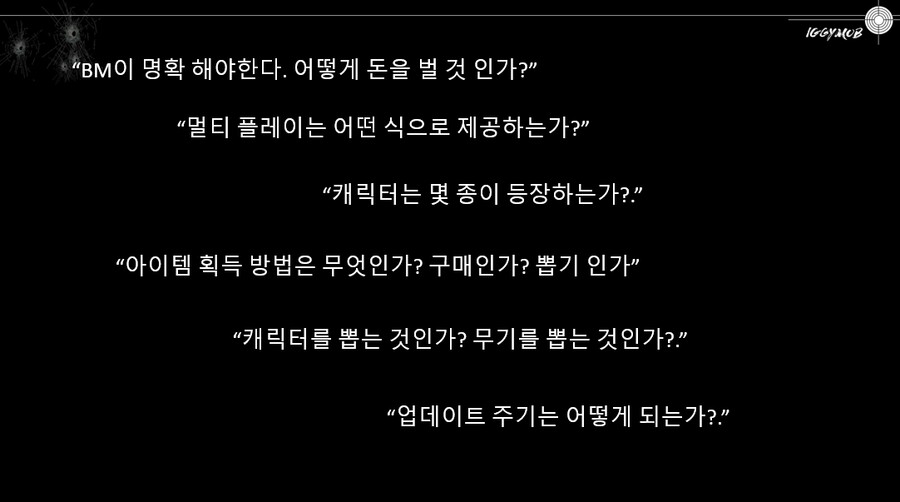 After exhibiting Gungrave Mobile at the Play Expo, the development team decided to switch to VR at the suggestion of Sony. I was able to bring the development know-how of Unity that I used at the time. This decision was made in light of the market’s interest in VR titles after the release of PS VR.

As a result, if it is configured in the form of VR rather than mobile, the game can show what it wants to show. In the long run, it was also a decision made in the sense that entering the console market would provide a good experience.

The first release of Gungrave VR took place at the PlayStation Experience 2017. At that time, feedback from many US users was a kind of motivation for Lee Ki-mob’s internal developers. Thanks to this response, limited editions were produced in the domestic market, and limited editions were planned with a rich composition that set low margins. 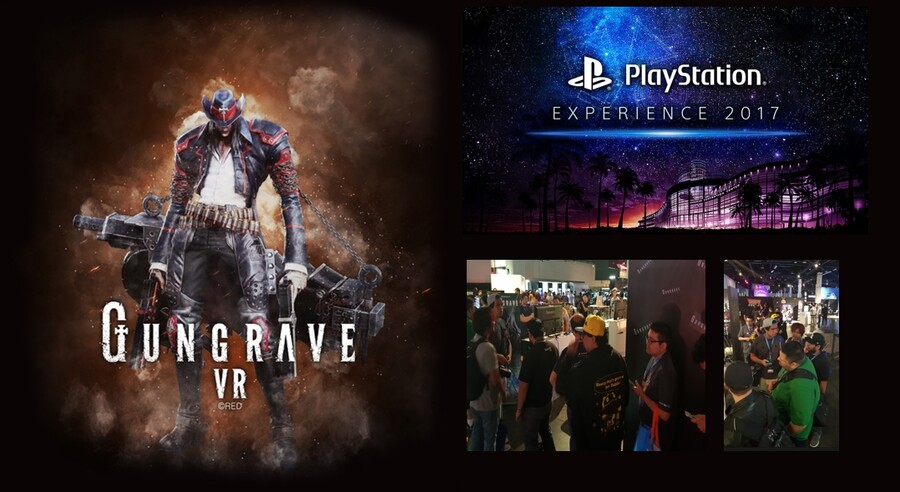 Gungrave VR was released not only in Korea but also in overseas markets. In Japan, Sega Games became a partner, creating an opportunity to learn the reactions and tendencies of users in the Japanese console market. In North America, it signed a publishing contract with Marvelous and introduced a physical version.

After going through this process, the development team worked as an opportunity to resolve the doubts they had when developing a console game. In addition, a lot of experience was accumulated and learned internally, such as how to collaborate with publishers and how to develop marketing. The publishing network and investment proposals made at that time became the results that continued to this day. 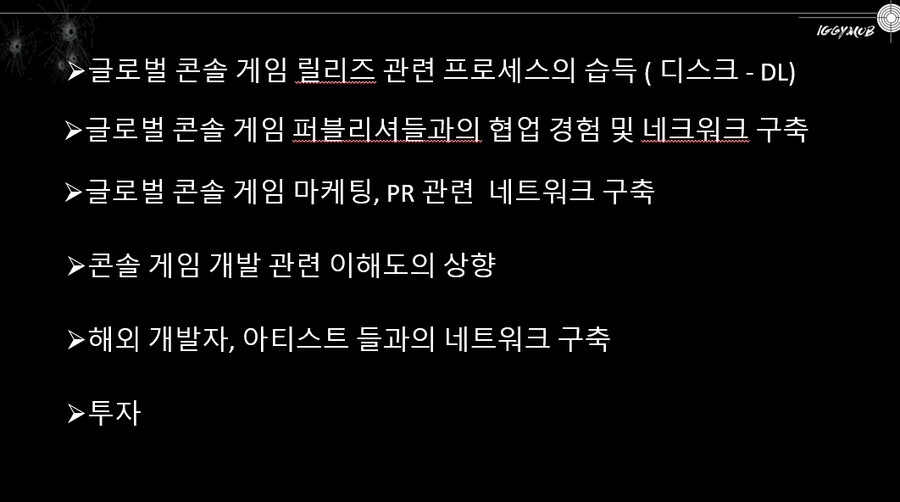 The biggest gift above all is that foreign artists have shown interest in it by showing it at an overseas game show. Lee Ki-mob’s experience at that time served as a gift and a result that led to actual collaboration after a crisis situation.

The performance and incidental aspects of Gungrave VR brought not bad results. It was a result not only in terms of sales volume, but also in terms of networking. Vice President Kim Min-soo recalled this time and said, “When I think back on that time, I was not drawn into pride.” This is because of difficulties in the development of ‘Gungrave Gore’, which is a complete sequel.

● Development of Gungrave Gore and Beyond Death Valley

The development stage of Gungrave Gore, which started after Gungrave VR, set the catchphrase to ‘a game that beats a man’s chest’, and artist Yasuhiro Naito took a representative illustration and started development. At that time, the development team consisted of about 50 people, and the original Development was carried out on the basis of inheriting the good points of the

In terms of visuals, we set the visual direction as a semi-realistic / live-action series, out of the toon format of the original series. The reason for making these few changes is curiosity and curiosity about how the visual changes will feel in the gameplay. And by the thought of avoiding things that look similar to those of the past. 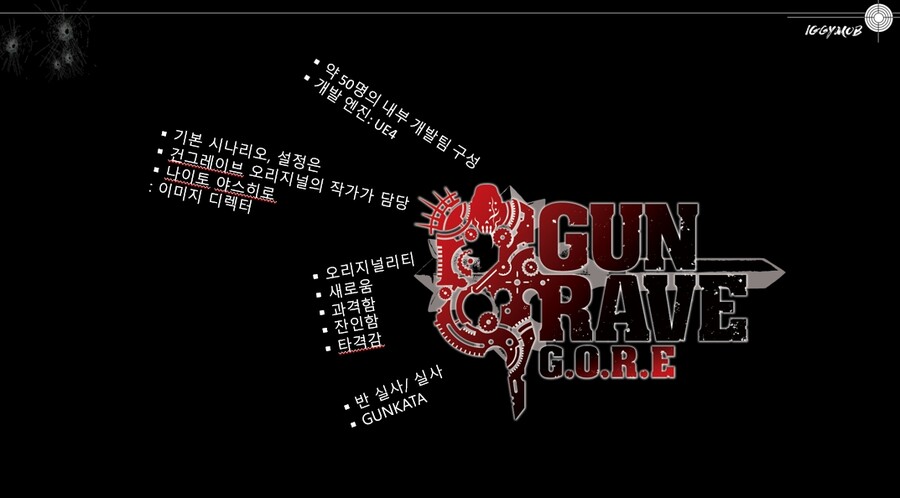 Gungrave Gore was first unveiled at the 2018 Tokyo Game Show. When the development facts were revealed, the reaction at the time was not bad. It also showed a positive reaction in the Japanese media. And the next year, 2019. Again, the trailer released at the Tokyo Game Show did not have a repercussion in Korea, but they were proud that their game was introduced in the main stream. The fact that it recorded the most number of views among the title trailers released at the time, etc., was also proof that the perception of a dead IP or an IP that no one remembers has escaped.

Director Kim Min-soo said that from this time on, he had fallen into an illusion. Looking back on the interest at the time, it was because it was an interest in IP, not a favorable reception for its development ability. Confused about this part. It was determined that the project was starting to crack little by little. Development required a cost, but this was the point at which this part began to crumble, and it was also the time when the existing investors gave up. According to the speaker’s expression, you will encounter ‘Death Valley’. Now came the difficult time to the point of shuddering. 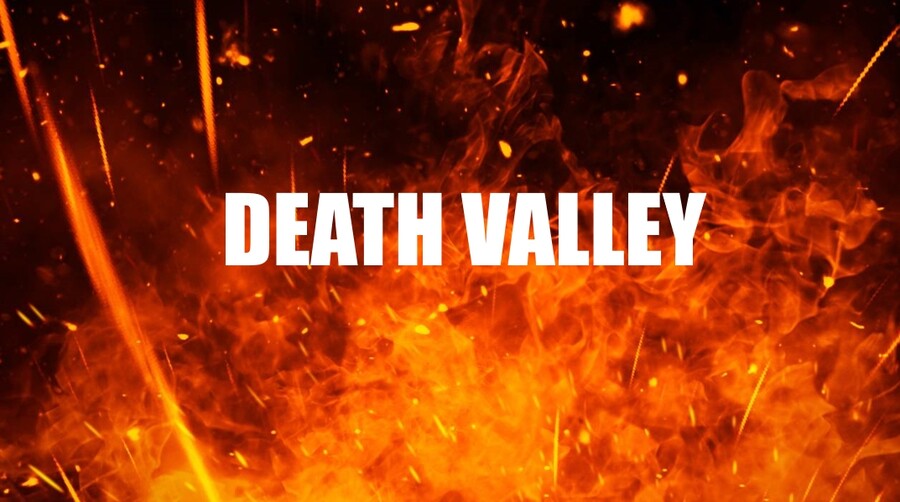 The number of developers from 50 when the game was first developed was reduced to six due to financial difficulties. It was time to make prototype builds and meet publishers. The lecturer recalled that time and said that he went through a period of searching for a publisher, mainly overseas, in a situation where he was using as much money as he could.

There were only a lot of publishers that Lee Ki-mob met at the time, and at the same time, it was a time worth cheering for. During the publisher discussion with Koei Tecmo, I heard from Shiro Kawauchi, “It fills my heart just to have made and brought this in Korea,” and I also experienced strong motivation.

Vice President Kim Min-soo said that through this candid conversation, he realized what is truly important in game development. He said, “I went through the process of asking myself questions, leaving behind the idea that I could make everything with money. If you give me the development cost that made The Witcher as it is, will I be able to make that much game?” 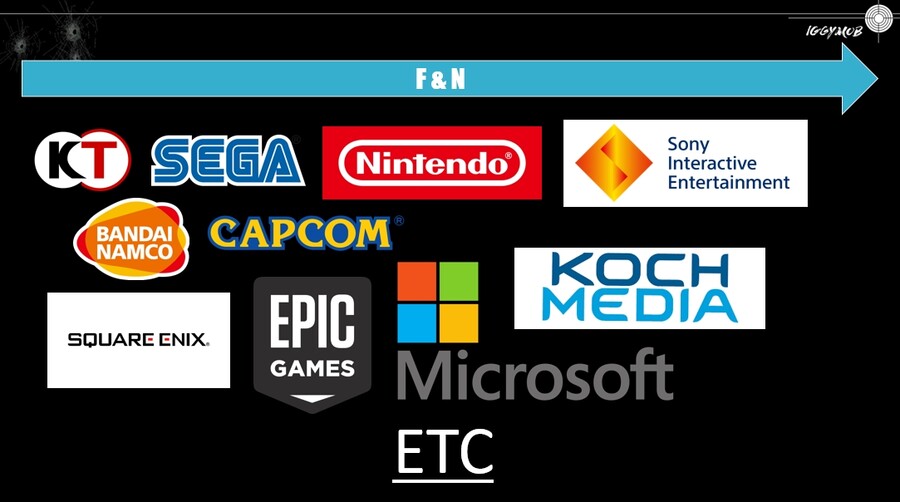 In other words, you don’t need money to make a game. The idea is that only when the outcome of development—whether a prototype or a build—can bring money or something. After this period, the perspective of the development team began to change. First of all, creating an attractive title is a priority, and then it is a shift to the idea that there will be people who help us and people who come to us. So the development of Gungrave Gore began to take a new approach.

In the development that started with such a new direction, Ki Mob Lee signed a publishing contract with Koch Media in Germany last year. financially. It is the result of enduring difficult times in terms of development and welcoming. The contract was concluded because there was a consensus by the vision Lee Ki Mob showed and the parts he wanted to show in the game. 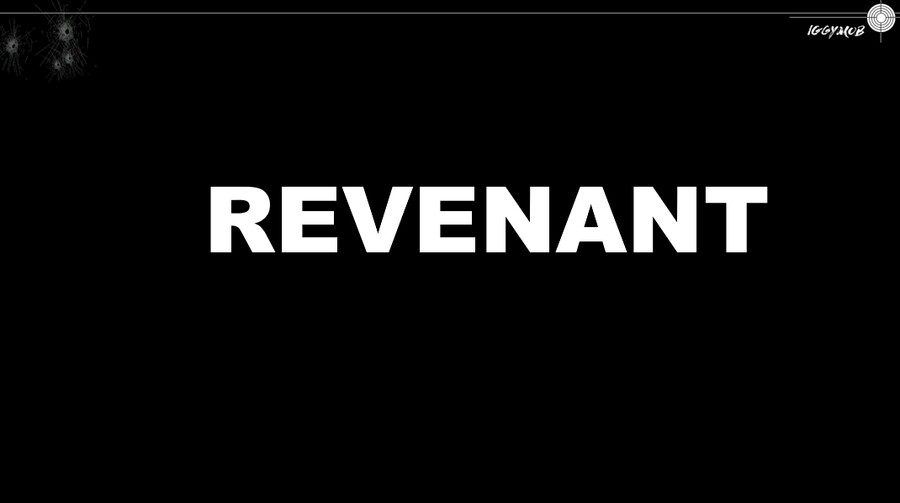 The lecturer said, ‘I have come to my senses’ only after getting out of this period. And I was able to have some new directions in development.

First, after a difficult period, the development team has adapted the attempts to establish a development process optimized for Lee Ki-mob itself rather than the development method used by others. This depends on the quality or number of other companies and their workforce. team enthusiasm. Because everyone’s concentration is different. It is because I am different from others, and it is not right to follow other people’s ways all at once. 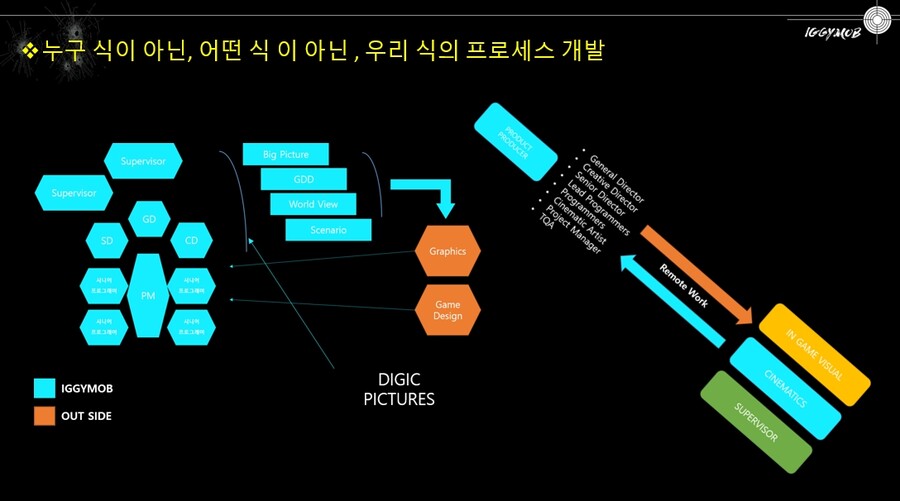 The second change is the recruitment of people with strong talents. In the domestic market, it was not easy to find manpower because there was no era when consoles were centered in the process of establishing its history. So change your mind and collaborate with people who have reached the pinnacle of that field. And the value and DNA obtained from it were transferred to the people within the team. Even in the short term these movements. And it is an attempt made in the judgment that it is right in the long run.

Following this policy, many people participated in the production and planning of Gungrave Gore. Writer Yasuhiro Naito, as well as ‘David Goldfab’, who worked at EA DICE, helped in the battle design side. In addition, ‘Ikumi Nakamuri’, an artist who participated in Bayonetta’s concept artist and Ookami, also formed a consensus and came to participate in creating a joint work. 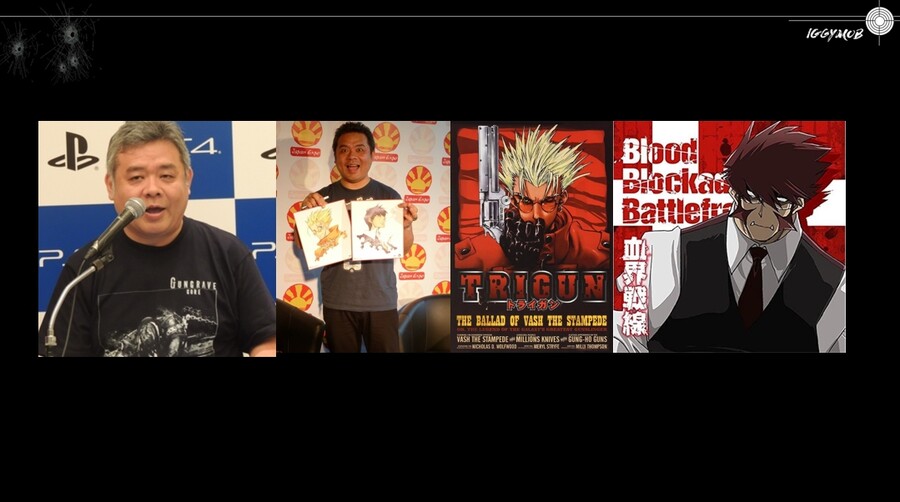 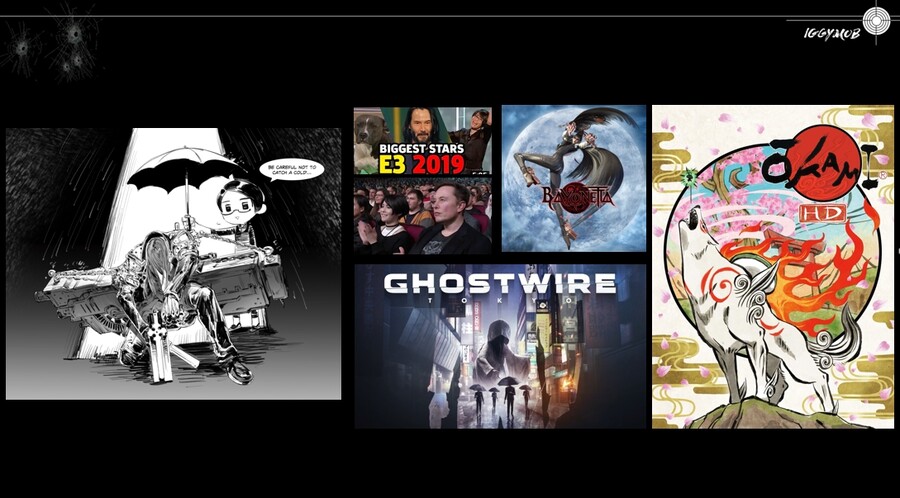 It was after this that I started paying attention to the 3C, which means character / control / camera. Since Gungrave Gore is a console action, we wanted to pursue fundamental fun by focusing on the first gate that players meet first and judge the game. In terms of gameplay, these three should proceed smoothly, and a lot of effort was put into making it into one mass.

The part that the development team is focusing on while developing a new one is ‘exhilaration of action’. It was possible to pay attention to the catharsis that overcomes difficulties such as Soul Like, but I decided that Gungrave’s play did not go with it. So while refreshing. We started developing with a focus on the player who kills enemies with simple controls. 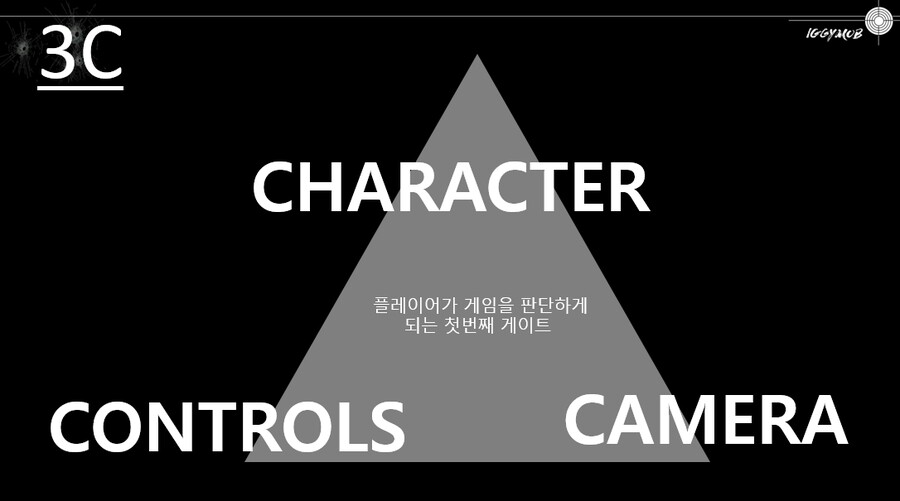 As a result, Gungrave Gore has a different form when compared to the current gameplay in 2018. As of 2018, if the gameplay focused on shooting by adopting manual aim and shoulder view, in 2019 half manual aim. And now, it has settled on auto aim.

The existing camera is also maintained after the change to the back view, and through gunkata, which can be said to be a hook in terms of gameplay, and newly added skills, more tasks are being built than in 20218. 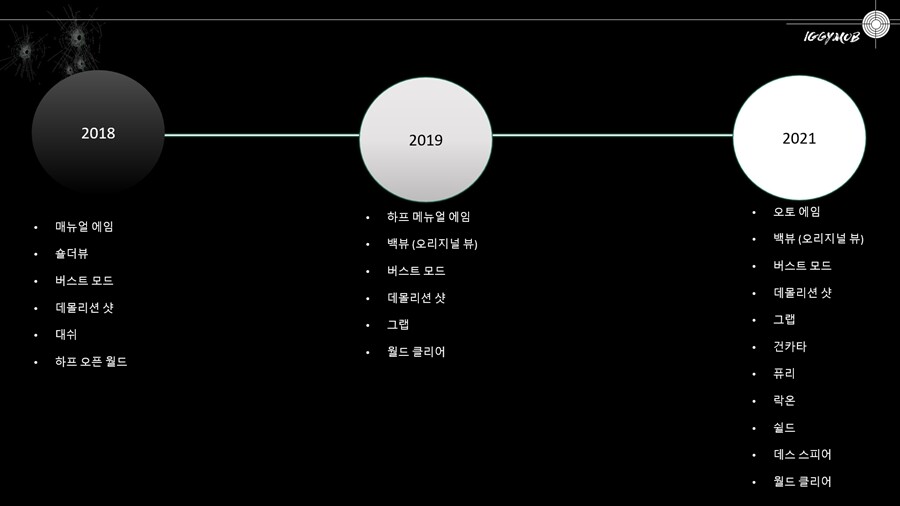 At the end of the lecture, Vice President Kim Min-soo delivered these words to the audience. “Numbers such as advance reservations are of course important, but the vision and philosophy of the people who develop the game is equally important,” he said. This also means that if you keep your vision or philosophy in the process of making a game, you will have no choice but to come out with someone who knows.

In this regard, for those who are currently developing difficult console titles, the gameplay and vision they have in mind. And if you can materialize the philosophy in the build. He also said that he could find a good partner. And finally, he concluded the lecture by emphasizing the fact that there are many people who take on challenges with various genres and platforms, and asking the audience to look at the domestic game market with a little more affectionate eyes. 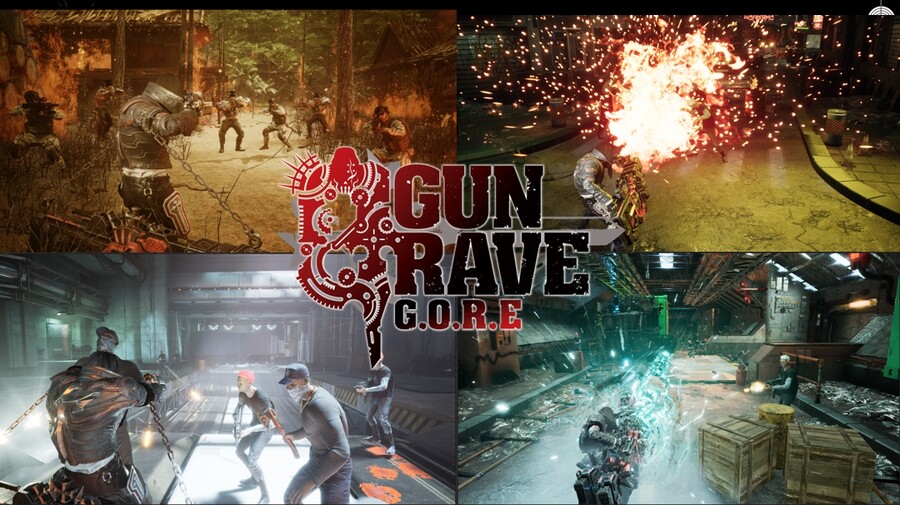