Actually, publisher 2K and developer Visual Concepts only wanted to reveal new information about the wrestling game WWE 2K22, which will be released in March, in January 2022, but at short notice we received an invitation to a briefing in which Creative Director Lynell Jinks and Art Producer Christina Diem Pham gave us the ten most important improvements and wanted to introduce major innovations.

We took this date, of course, after all, information about the title has not been covered so far and publishers and developers have to make amends for the miserable WWE 2K20.

The ten pillars of the new wrestling game

After a brief welcome, we are shown a short video that shows very little gameplay, but the features of WWE 2K22 mentioned above sound extremely promising. They are listed.

Although we only got little insight into the game itself, Creative Director Lynell Jinks and Art Producer Christina Diem Pham then took the time to further elaborate on some of the features presented. For example, the two said that the controls had been completely redesigned.

WWE 2K22 should offer enough depth to allow hardcore fans full control over the game and fight tactically, but it should now also be much easier to understand, so that beginners will also have fun and a sense of achievement right away.

Lynell Jinks then explains to us that the quality of the game will be based on the NBA 2K series, which is also being developed by Visual Concepts. So the gameplay engine was not just turned inside out, it was redesigned.

The animations have been completely redesigned so that kickouts, dives and reversals, for example, now feel much more realistic than before in the series. The around 30,000 previous moves have been revised and around 5,000 new actions have been added.

Since the presentation should now be much more immersive, it creates the feeling of a real WWE broadcast. There are probably more camera angles in WWE 2K22, revised viewers with much more and much more varied and appropriate reactions to what is happening in the ring, and a new team of commentators. 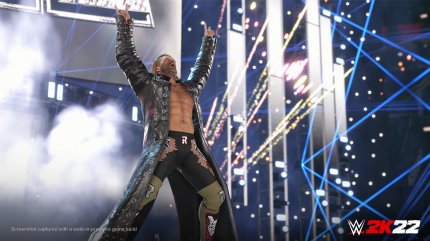 But not only the presentation, the graphics themselves have now been heavily revised. Christina Diem Pham went into this in more detail. The character models of the wrestlers included in the game have been completely redesigned.

As with the basketball simulation NBA 2K, the real sports entertainers were scanned with over 80 cameras. The difference to the last parts is actually enormous. In the short video we saw close-ups of the models by Edge, Drew McIntyre and Bill Goldberg, which were really extremely realistic and detailed. Even the long hair doesn’t seem to look as bad now as it did before.

But there was also a lot of tweaking on the look of the game elsewhere. All environments have been revised and new shaders and a completely new lighting system are used. In any case, the excerpt from Drew McIntyre’s entrance looked pretty good. Bayley, on the other hand, looked like her model had been neglected.

In addition to the new technology from WWE 2K22, the main focus of the presentation was on the game modes. Among other things, a new showcase was announced in which the most important stages in the career of a well-known wrestler are re-enacted.

We assume Rey Mysterio, because the Biggest Little Man was briefly shown here and he was already featured in the first teaser for WWE 2K22. However, it has not yet been said whether there will be only one or even several showcases. 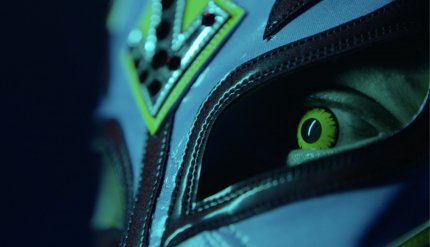 But there will definitely be a career mode again, in which you can turn a self-made wrestler from a rookie to a legend. This mode is now called MyRise and should also be greatly improved, as you can now determine your own path more freely.

You can even start rivalries that lead to smaller sub-quests. Here, too, they seem to have listened to the fans, who have been using a story mode for years like the classics Here Comes The Pain and SmackDown! vs. RAW wish.

In addition, you should now have a lot more options to design your own wrestler creations. According to art producer Christina Diem Pham, there are now many more tools, body types, objects and other components that are supposed to make the CAWs more realistic. We very much hope that this will really work, because far too often the in-house creations looked like Playmobil figures next to the real catchers.

GM mode is back!

The two developers of Visual Concepts didn’t say much about the universe mode. So far it is only known that the mode has also been revised and should offer more variety. But we learned more about MyFaction. The mode is probably a kind of FIFA Ultimate Team, in which you collect wrestlers and turn them into a legendary group similar to the Four Horseman or nWo.

According to the developers, the mode should also be possible for single players and they emphasized that players who buy virtual credits for real money will not have any gaming advantages. Well, we would have gladly done without this “feature”. Here we are initially skeptical.

Another mode made our hearts beat faster: After more than ten years of abstinence and requests from fans, the GM mode has finally returned.

Here, too, the developers did not go into depth, but just like in the famous SmackDown! vs. RAW 2007 it should be possible here to manage a complete brand, execute drafts, negotiate contracts, set rivalries and set storylines in order to rise in the audience’s favor and become number 1 in the wrestling world.

More information on gameplay, technology and game modes will be available in January next year. Then 2K and Visual Concepts would like to present WWE 2K22 in detail. We are very excited about it, because the items on the “Hit List” sound extremely promising and give rise to hope that the developers will bring us some real reparation after the 2K20 debacle.

I am pleasantly surprised.

When 2K invited me for a “short presentation” I didn’t think the developers would be giving out that much information about WWE 2K22. Above all, all the features that were listed on the so-called hit list seem to be well thought out. Sure that the graphics have to be better and the gameplay revised is not surprising, but the game modes in particular sound promising and show that 2K and Visual Concepts know that they have something to make up for. Personally, I am particularly pleased with the return of GM mode. Even then, I was wasting way too much life building my wrestling brand and I’m willing to do it again when WWE 2K22 comes out in March 2022. Provided, of course, that everything else is correct. But here I am cautiously optimistic after the presentation.