2K and Gearbox have announced that they are updating Borderlands 3 with additional content ‘Vault Card 3: Bunker Master’.

Vault Card 3 is the content that contains the essence of bunker and badass in Tiny Tina’s Wonderland, which will be released on March 25, 2022. You can experience it in advance.

To commemorate the release of Vault Card 3, 2K is holding a limited-time cooperative loot drop event from 2:00 am on November 19th to 1:59 am on the 26th.

During this period, when co-op is played in online multiplayer or split screen, all bad-ass enemies will drop more loot, and the greater the number of cooperating party members, the more loot will appear.

The Vault Cards and the rewards offered by each Vault Card can only be obtained by purchasing the Director’s Cut Add-Ons individually or by owning the Borderlands 3 Ultimate Edition, Season Pass 2, or Season Pass Bundle.

Borderlands 3 is currently available on PC through the Xbox One, Xbox Series X|S, PlayStation 4, PlayStation 5, Stadia, Steam and the Epic Games Store.

Meanwhile, Borderlands 3 is a game developed by Gearbox Software and published by 2K, and 2K is a publishing label, a subsidiary of Take-Two Interactive Software, Inc. (NASDAQ: TTWO). 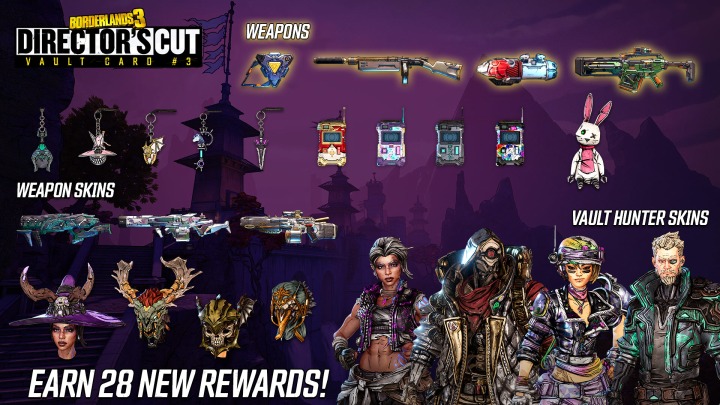