– ‘Teacher Hitman Ribbon!’ topped the popular charts in both major app markets thanks to the steep rise

– The user’s interest in the original animation and the high game quality that supports it are well-received by users.

DAMO Games announced on the 19th that ‘Teacher Hitman REBORN!’, a mobile action RPG that is being serviced on Google Play and Apple App Store, has been ranked No. .

‘Teacher Hitman Reborn!’, a mobile game using the animation IP of the same name even before its release, satisfies users with the high game quality that supports it, and has been on a steep rise right after its release.

‘Teacher Hitman Reborn!’, which topped the Google Play and Apple App Store popularity charts within a day of its release, is a mobile game where you can see the characters, animation stories, and actions that appear in the anime intact in the game. In particular, through the OST that stimulates memories and the participation of the voice actors, the emotions and emotions of the original were embodied as they are.

You can feel the thrill of the battle of ‘Teacher Hitman Reborn!’, which perfectly reproduces the action in the original animation, and you can also feel the battle play that you enjoy with your own strategy through various combinations such as character attributes and box weapons. It is able to provoke a high response from users.

An official from Damo Games said, “Thanks to the users who gave the game a lot of interest and love, I am grateful that I was able to rise to the top of the popularity chart.” I will,” he said. 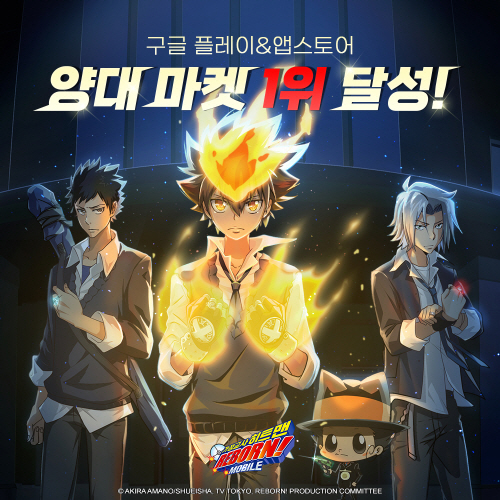