The PS5 controller and the headset are already available in several colors. Maybe you will soon be able to adjust the color of your console and that officially. At least that’s what a new Sony patent shows.

There are already a number of unofficial PlayStation 5 faceplates on the market, and for the past several months Sony has been busy filing a lawsuit to stop these sales. Not without reason.

Even before the latest PS5 was released, Sony announced that its you can swap the faceplates later to customize the console to your liking. The topic was quiet for a long time, but at the beginning of November Sony filed a new patent and it was approved on November 16.

You can see numerous drawings of the panels and how they work. Unfortunately, the patent does not reveal which colors and patterns there will be, but it is it is quite possible that you will not have to wait much longerto find out.

(Those: USA Patent and Trademark Office)

The DualSense controller is not only available in white, but also in Midnight Black and Cosmic Red:

Even a year after the official release of the PlayStation 5, it is almost impossible to get one of the coveted consoles. To change that, Sony recently launched a new offensive and is now selling the console itself for the first time via the PlayStation Direct portal.

The controller in the color Midnight Black is currently reduced on Amazon: 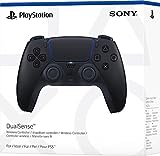