In the LS 22, the AI ​​helper can give you a helping hand and automatically do field work for you, load field crops and deliver them to unloading stations. We explain at this point how you configure and use the AI ​​helper.

To use AI helpers in Farming Simulator 22, open the game menu and look at the selection bar on the left of the screen. The second symbol from the top (steering wheel) stands for the AI ​​helpers. In this menu you set everything that AI helpers can do automatically.

To assign a job to AI helpers, you first have to select a free vehicle on your map and then select the “Create job” option at the bottom of the screen. Various selection options then appear on the right-hand side of the screen. Here you can specify the type of job, the vehicle to be used, the target position and more.

Depending on whether your helpers are to do field work or load and / or deliver, you have to observe certain requirements, which we will explain to you in more detail below. Always keep in mind that each active helper costs you 1 euro per second. If you need money, you can use the money cheat in LS 22.

Important note in advance: Unfortunately, the AI ​​helper does not always work reliably and often has problems finding its way, which the developer GIANTS Software will hopefully improve in the future. If you use AI helpers and assign them a job, always pay attention to any error messages in the top right of the screen. As a rule of thumb, make sure that your AI helpers and the vehicles they use have as few obstacles as possible in their surroundings and on the way to their destination, otherwise you will (still) have to readjust often here.

So that you can configure a helper for field work, it is not enough to just assign him a vehicle. The option will only appear under “Create job” if the vehicle is, for example, appropriately equipped with a cutting unit. You also have to make other settings on machines beforehand, nothing can be set here during fieldwork. The AI ​​helper can only recognize from the context that this is field work.

First select a vehicle with a suitable cutting unit or other accessories and then select in the helper menu Create job → field work the end. Then you can determine the target position, which should logically be at the corner of a field. You can place the cursor exactly at the position on the map where it should start. In addition, you can drag the cursor in a target direction so that the helper aligns itself accordingly in this direction. Once that’s done, you can select “Start job” at the bottom of the screen and the AI ​​helper will hopefully start work.

Again, pay attention to the path-finding problems mentioned at the beginning. Should there be any problems, you will get error messages like “Helper X has ended work unexpectedly – target cannot be reached!” Or “Helper X is blocked by an object!” In the top right corner. Here you have to try it more often and possibly specify a goal that is easier to reach (e.g. only on roads).

With a proper control panel, the control of the LS 22 is even better! 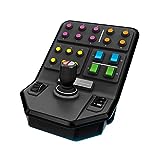 Unfortunately, when you are done with the field work, AI helpers cannot automatically unload the harvesting machine onto a trailer; you have to do this yourself or use mods. The AI ​​helper can then automatically take care of the delivery of the cargo. Please note that you can only select the option to deliver in the helper menu if a corresponding trailer is mounted on your vehicle.

So select “Deliver” and determine the unloading station. If you want to unload in one of your silos, you have to know the name here, which you can find out via the construction menu. Finally you can decide whether the helper should repeat the activity or not. If so, it drives back to the charging station that you have determined with the cursor. However, this usually does not make sense because you have to take over the step of unloading the harvesting machine yourself, as already mentioned.

As a last option, you can set the AI ​​helper to automatically load crops from your silos and deliver them to the unloading stations on the map. As with delivery, this is of course only possible with a trailer mounted.

To do this, you also have to select the charging station and the product that should be loaded onto the trailer in the helper menu. This then determines the unloading station where the delivery is to be sold. If an exclamation mark appears to the left of the selection, the selection is invalid. This can happen if, for example, you try to sell wheat at a spinning mill, this logically does not work.

In the following video of the YT channel Cornhub You can also see everything you need to know about the AI ​​helper again:

If there are frequent error messages, let the AI ​​helpers drive to other locations on the map using the “Free travel” option and try again. Do you have any other problems or questions about the AI ​​helper in Farming Simulator 22? Then write it to us in the comments and help each other too!

How well do you know the farming simulator?