How do I destroy the reputation of a beloved game series in one fell swoop and at the same time make millions of fans incredibly pissed off? Rockstar Games found the answer to this question when the studio launched Grand Theft Auto: The Trilogy – The Definitive Edition on November 11th. The bundled new edition of GTA 3, Vice City and San Andreas was completely bugged at the launch, temporarily disappeared from the sale and was ultimately showered with negative ratings on Metacritic.

At 0.5, the trilogy has one of the worst user scores of all time, even worse than Warcraft 3 Reforged! Quite a disaster release then. But how could it all go so badly? In this special we go on a search for clues.

Haven’t you learned anything from cyberpunk?

If you look back on the time before the release, you could have guessed that something was wrong with the remaster trilogy. Some “red flags” were noticed quite early. For example, there was still no official gameplay material from the games even a day before the planned release. Sure, a few leaked scenes eventually appeared on the net. Rockstar itself, however, limited itself to Twitter gifs and YouTube trailers. They then mainly focused on the revised cutscenes. We never got to see proper gameplay for more than five seconds at a time. Nobody really knew what the finished game would look like. With a view to the debacle surrounding Cyberpunk 2077, one should have become suspicious here at the latest.


Unfortunately, the screenshots that Rockstar published before the release do not reflect the final graphics quality.

And if not there, then at least at the no-name developer Grove Street Games, from which most players had probably never heard of. That could also be because the team was still hot until August 2020. Why the sudden rebranding? Evil tongues would claim to cover up the company’s not-so-glorious past. War Drum didn’t necessarily have the best track record: Full-fledged games were never developed, mostly only ports of already published titles – for example GTA 3, GTA Vice City and GTA San Andreas. They were brought to Xbox 360, PS3 and smartphones between 2011 and 2013. And in a pretty pitiful condition.

Most of the improvements were rather half-hearted. New shaders gave the game a strangely shimmering look, as if characters and game world had been dipped in oil. In addition, there was suddenly no analogue control, because the operating scheme had to work on the smartphone. In addition, there were numerous bugs that had not yet existed in the originals. Game crashes, broken saves and performance problems rounded off the catastrophe in an atmospheric way.

So it wasn’t a good omen that Grove Street Games were allowed to try their hand at a GTA again. And then, of all things, they used the mobile offshoots as the basis for the Definitive Edition. The versions for Android and iOS were simply rebuilt with the help of Unreal Engine 4. “Basically, we took over the physics engine from the original,” said rock star producer Rich Rosado in an interview with The Gamer. “It’s exactly the same game code” – with all the problems, bugs and glitches that existed a dozen years ago. If you’re on a quad in GTA San Andreas and then look back, you might still be jumping at CJ’s disfigured grimace. 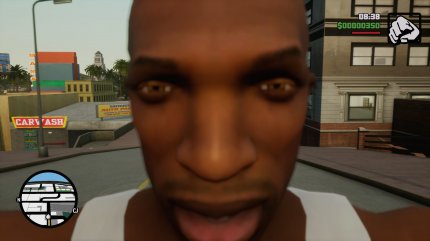 When driving a quad through San Andreas, protagonist CJ has a lot of fun.

But even where changes have actually been made – mainly in the graphics – there are errors constantly. Don’t get me wrong: Grove Street Games actually improved some things. Numerous assets of the original have been exchanged for counterparts from GTA 5. Trees and leaves look much better now. The lighting also looks much more natural.

In many places, however, the creators have obviously chosen the fast and cheap variant: For existing assets, Grove Street Games simply used an AI program that automatically upscaled the textures of the games. If necessary, improvements were made by hand, because “the AI ​​hated signs and always messed up their lettering,” say the producers. You can still see that in the finished game, because the developers have by no means removed all spelling errors. At the music shop “Screamin ‘Colins Guitar” from Vice City alone, you will notice several mistakes at once.

Then there is the terrible rain, which falls so thickly from the sky that it is almost impossible to see anything at all, especially at night. The assumption here is that the developers simply put a kind of graphic effect over the gameplay that stubbornly follows your character. As if you always had a bad-tempered thundercloud over your head.

That would also explain why it sometimes even drips into garages or tunnels. Or why there are regular display problems during thunderstorms. When the rain effect hits masses of water in the background, it causes ugly graphics problems. But the performance also suffers from the bad weather. Frame drops and freezes are not uncommon. Overall, the Definitive Edition is in a lousy technical condition – whether on the Nintendo Switch or a PC with a high-end graphics card. 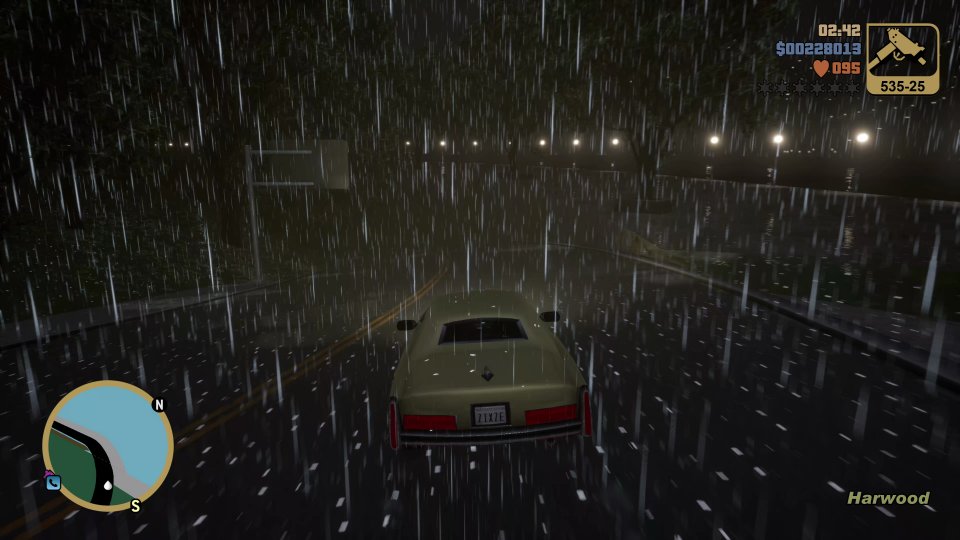 The rain in the GTA trilogy is a real nuisance.

But that was actually not the reason why Rockstar had to take the game out of sale in the meantime. The actual cause is even more stupid: As data miners discovered, Grove Street Games simply slouched with code. A few examples: While some pieces of music have been removed from the remaster trilogy for licensing reasons, many others are actually still there. They were simply scripted to stop them from playing on the radio. Unfortunately, this script didn’t work too well, so players even got to hear Lionel Ritchie’s “Running With the Night”. In the original release of GTA San Andreas, this was actually reserved exclusively for the soundtrack of the Playstation 2 version.

The tip of the inability is probably the fact that the source code of the new edition even contains a version of the main.scm file that contains all the scripts from GTA III, Vice City and San Andreas. It is basically the foundation for all game mechanics. The holy grail for every modder, another embarrassing PR debacle for the makers.

Is the reputation only ruined …

Overall, it has to be said: Rockstar Games has not really covered itself with fame with the Definitive Edition. Especially since the originals of the GTA classics were removed from the store at the time of the release and numerous mods were banned from the network by means of a copyright lawsuit. So fans were practically driven to buy the bugged new edition, even though they obviously knew about the glaring problems. Why else would the review embargo have been placed on the release day and test samples distributed shortly before shortly. It all has the bitter aftertaste of an unscrupulous cash grave. Here, as little work as possible, as much money as possible should be made – at the expense of starving GTA fans. A pretty bad number.

Rockstar has now apologized in a public statement. The trilogy was not published in a condition that met its own quality standards, it is said. To make amends, numerous patches have also been announced and the originals of the GTA classics are again available on Steam. But the damage is done. And it won’t be forgotten anytime soon. With the Definitive Edition, players all over the world have been shown that they can no longer trust the big name Rockstar Games.

Supports PC Games – it only takes a minute. Thanks!