– A large number of influencers and popular broadcasters who enjoy Diablo are dispatched, a talk show about adventures in the sanctuary, and an exhilarating PVP showdown.

– Starting with the preview broadcast tomorrow at 8:00 PM on November 27th, you can watch it on YouTube, Twitch, and Afreeca TV on Saturdays at 8:00 PM for 8 weeks from December 4th.

In SND, veteran players, influencers, and broadcasters from popular games, who have united in common that they enjoy Diablo II passionately, appear and share pleasant jokes about the adventures in Sanctuary for a week. Afterwards, it will be an exciting time where players can compete against each other in game skills through exhilarating PVP battles divided into individual and team matches.

SND, which will be aired for the first time on December 4th, will be held every Saturday for a total of 8 weeks until January 22nd next year.* You can watch it on Diablo’s official YouTube, Twitch, and Afreeca TV channels from 8pm. In addition to the professional game broadcasters such as Kim Dong-jun, Park Sang-hyun, Lee Seung-won, Lim Seong-chun, Jung Woo-seo, and Jeong In-ho (in alphabetical order), popular game influencers who match them every week appear and engage in talk shows and PVP battles. 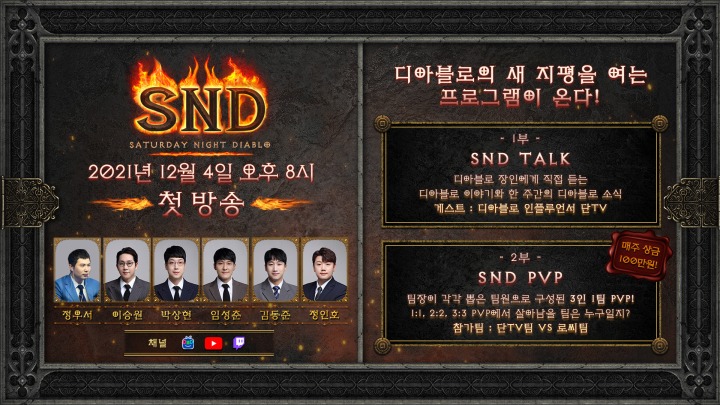 Prior to the official broadcast, on Saturday, November 27th, at 8 pm, three commentators Park Sang-hyun, Lee Seung-won, and Jung Woo-seo will appear, and a preview broadcast will be prepared to introduce fans in detail about SND’s journey over the next eight weeks.

For more detailed new information such as the schedule of this SND program, please refer to the official blog post (https://news.blizzard.com/ko-kr/diablo2/23752344/) can be found in 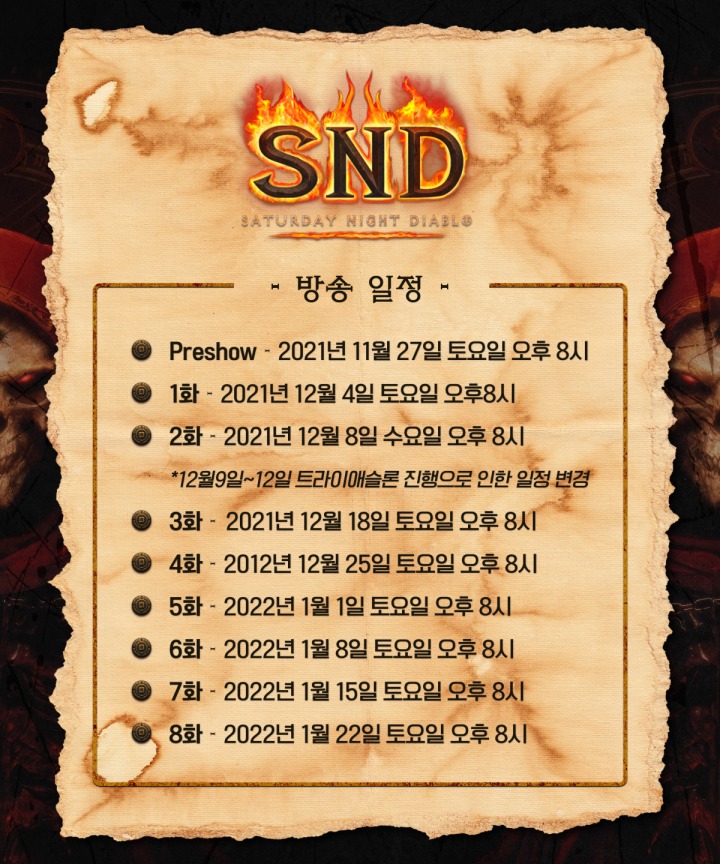