Coding, one of the most important skills of today, remains a book with seven seals for many people. But it doesn’t have to stay that way in the new year 2022! Because there is a game on Steam that brings you closer to JavaScript in a playful way. The important script language is used in browsers, but also by hackers.

And that’s exactly what would-be neo you play in Bitburner, a free hacking role-playing game that was released on Steam on December 11, 2021. To automate processes and steal money, you even write your own scripts under supervision. So you should be able to learn the basics of JavaScript. On the Steam page, the developers explain that basic programming skills are helpful, but not absolutely necessary.

As the gameplay trailer shows, Bitburner is getting pretty complex! The will to learn something new is therefore assumed: 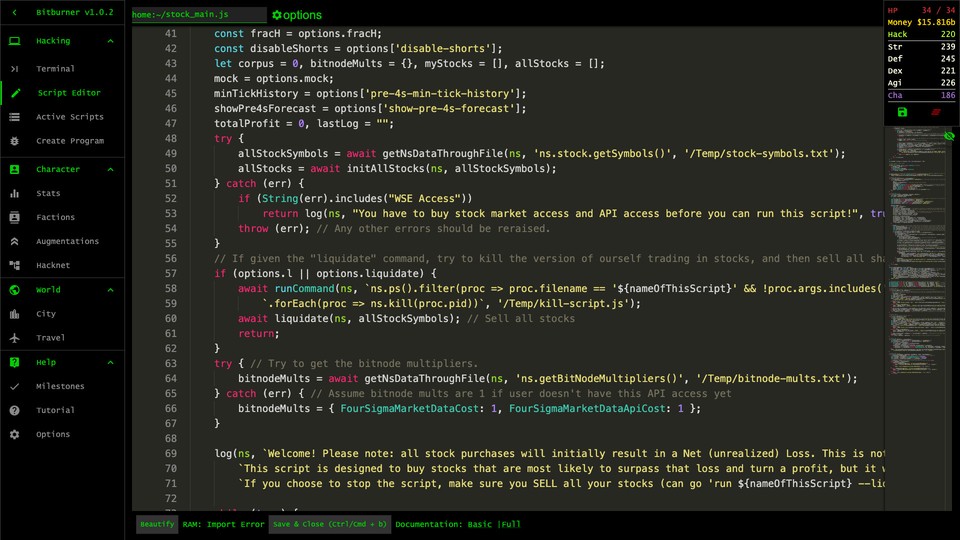 This is how Bitburner works

Bitburner takes you by the hand right from the start. You search for servers using simple terminal commands and connect to one, then finally hack it by command and steal money. Your character’s hacking ability will improve, which will give you access to secured servers later. In addition, you can specifically weaken servers to gain easier access.

So that you no longer have to carry out every hack by hand, you write your own scripts that target the servers independently. So the goal is to play a large part of the gameplay after the Idle-Automate principle. You should real programming questions answer, play mini-games, trade on the stock exchange and upgrade your character with augmentations.

The more you learn to understand JavaScript and transform your knowledge into your own scripts, the more efficient you will be in earning money. This is an unusual form of progress that is directly tied to real-world skills.

On Steam, the players are literally overwhelmed with praise. As things stand, 95 percent of over 1,000 reviews are positive. Fans praise the simple basic mechanics, which, however, gain in depth and sophistication due to the possible complex scripts. So write about Cake Eater Games:

An absolutely fantastic programming challenge!
The game offers “simple” mechanisms that are very easy to understand. Hack the user, multiply their money, steal their money, weaken their security.
SIMPLE, RIGHT ?! Now automate it! And create a script that takes full advantage of these mechanisms. The game mechanics may be simple, but automating them and understanding the math behind them isn’t. And that’s why I love this game.

For gamers Oatmealine Bitburner clearly stands out from other idle games:

Most idle games are where you see people having ridiculous game times – mostly because they turn them on and leave them on to get extra things while they aren’t focused on the game.
At this game? No. I haven’t slept in 2 days. 10/10

Hacking in games has a long tradition. You can read more about this in our article:

»Look at you, hacker«

Have you tried Bitburner yet? Do you have a real programming background and can (not) recommend the game? Why? Write to us in the comments!