According to the Square Enix boss, video game manufacturers are talking about the NFT year, and this is the star that should continue into the year 2022. Cryptocurrencies and NFTs will determine the future of gaming, decentralized gaming is set to be a big deal, and new types of user-generated content will ensure thriving in-game economies.

In this special we will tell you what NFTs actually are, how blockchain works and why I as a gamer need to know. We also explain the answers to important questions: Why are graphics cards so expensive, will there be a metaverse, and in the future I won’t be able to avoid the NFT train at all?

First, let’s take a look at Ghost Recon: Breakpoint. Ubisoft proudly announced that there are now NFTs in the game, in the form of skins. Cosmetic items are really nothing new, so what does this have to do with NFTs?


Ubisoft’s NFTs for Ghost Recon Breakpoint didn’t go down as well as hoped. This shows how speculative trading in NFTs is.

Non-fungible tokens are virtual, non-exchangeable items. It can be a weapon in a game, a piece of music, or a picture. Unlike other data, this cannot simply be copied. They have a license and metadata that identify them as the original.

Therefore, NFTs are always available in limited numbers, as each one has to be manufactured manually. So if the skins are sold out, there aren’t just any new ones. This limit, combined with demand, is what gives it value. Similar to paintings in the real world, only the original has any value. With NFTs, however, it is much easier to determine who owns the original, since the data cannot be forged.

From this point of view, NFTs are collector’s items and all price fluctuations are purely speculative. If everyone wanted Ubisoft’s skins even though they were sold out, they could be resold at significantly higher prices. But although NFTs often go for huge sums of money and a large market for crypto games has developed, Ubisoft was hardly able to sell any of the NFTs on offer.

All the more reason to be skeptical and ask the big questions from a gamer’s point of view: is it safe? What does this mean for the environment? Can’t I just don’t care about the topic? Where are the graphics cards? And: what is it actually?

who that NFT owns is controlled by many people at once, through the so-called blockchain. Each digital currency has its own blockchain, which is based on various technical systems. Basically it is a Data network from a large number of computers. Everyone who participates here checks with every sale that everything is going well.

Since a large number of computers are connected to the system, large amounts of electricity are consumed, which the currency Bitcoin is regularly accused of.

Proof of Work: The power guzzler

Bitcoin is based on the Proof of Work system. Here, all computers are given a calculation task for each requested transaction. The one who can solve the task the fastest puts it into the system, whereupon all other computers have to check the solution. The computer that has solved the task is awarded the contract and is allowed to attach the transaction to the blockchain and extend it.

The task only exists so that the system cannot be tricked. If someone were to feed in a wrong transaction, they would have to ensure that the bid was accepted, which would not be worthwhile due to the high computing power required. As a yardstick, it is said that a Bitcoin transaction consumes as much electricity as one average household in 5-6 weeks.

Proof-of-stake no longer depends on the fastest computer, but on who owns the most of the currency that is currently being traded. The people with the most shares are then drawn to see who is allowed to validate the transactions, and the person then receives a reward in the form of transaction fees.

The system is secured by the fact that incorrect validations are penalized and you get something from your currency, too in the case of unintentional mistakes. Since significantly fewer people have to participate, cryptocurrencies are very efficient on this basis. The currency Tesoz, which is used by Ubisoft, is based on proof-of-stake and consumes 25 million times less energy than Bitcoin for one process.

Ethereum: where are the graphics cards?

But the problem of Ethereum is quite another. Proof of Work requires a lot of computing power in order to be able to participate, “mine” and earn money. In the meantime, special devices are being built for Bitcoins, so-called ASIC: Application-Specific Integrated Circuits.

In English, it is a component that is intended for a very specific process: in this case, to solve the task of the Bitcoin blockchain. These devices are also available for Ethereum, but they are significantly less efficient.

Therefore, many choose the alternative: graphics cards. These not only have the advantage of being able to “mine” any type of crypto currency, but also those of being a graphics card, which you can even play with. This is particularly interesting for private crypto “miners”, but with the current rise of Ethereum it ultimately ensures that the prices for high-quality graphics cards in astronomical heights rise and stay there.

Cryptogaming: what is it actually?

The term cryptogaming appears again and again, but is misleading because it suggests that you can get cryptocurrency yourself by playing the game, which is not the case. However, you can “earn” NFTs in certain titles – mostly after investing in advance – and then sell them to other players. The return depends on speculative factors such as the rate of the currency, supply and demand. The system has the catchy name Play 2 Earn. 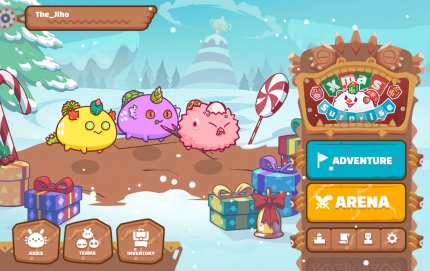 Kind of like Pokémon only with NFTs and a bunch of money to go shopping with.

An example of such a game is Axie Infinity, in which you fight against each other with Pokémon-esque characters, breed them and finally sell them. Before you can start the game you first have to buy Axies yourself, which can be bought for a few hundred dollars. To breed – that is, to earn money – you also need love potions, which you win through battles and which are given at regular, but rare, intervals from the game.

Since each Axie can only mate seven times, one always has to weigh up when to sell. Strong axies with good stats that have been little used for breeding bring in more money.

Theoretically, an individual can earn an additional salary with it, in practice it is a speculative business. The prices depend on the real economy and the number of players, as well as the current rate of the crypto currency Ethereum, which is itself subject to constant fluctuations. As is the case with cryptocurrencies.

With this form of Play 2 Earn, the game’s gameplay takes a back seat and just has to be functional. Too complicated or sophisticated game mechanics would make it difficult to earn money and stand in the way of the principle of the game.

About that complains too Max Nichols, Senior Technical Designer bei Bungie (a corresponding tweet has since been deleted). The motivation to play a game for fun would be overshadowed by the motivation to make money. Just the possibility of making money ensures that the fun falls by the wayside.

Here one speaks of intrinsic and extrinsic motivation. Intrinsic motivation describes when you play a title for your own sake, while extrinsic factors come from outside and become the main problem for many players when it comes to Play 2 Earn. The psychological effect also occurs when you don’t want it to.

The Metaverse: Can’t I care?

There are already countless Play 2 earn games that the normal gamer can usually do not care. They are only used to make money and not because they provide such a great gaming experience. On marketplaces like Gala Games horrific sums are being paid for various mobile phone games such as Town Star, where people easily spend 6,000 euros on a virtual basketball court. Again, it’s pure speculation with limited goods that you can just avoid, right?

Unfortunately, it doesn’t stay that simple, because more and more large developers seem to have made it their business to create a metaverse: a place where video games and the real world merge.

The ideal includes trading equipment across game boundaries, so that you can carry a sword from WoW in Final Fantasy or know your favorite mount is always by your side. This is a utopia that would only make sense if we all live in all the games and we never end up in a PvP lobby where all the other participants are stronger than us.

Blockchain, NFT and Cryptogaming: Everything You Need to Know (1) [Quelle: Axie Infinity]